Inside the Archives: Lessons Learned: Researching the Battle of Jutland 1916 at the Naval Historical Collection, U.S. Naval War College

It all started with the desire to create an exhibition for the Battle of Jutland’s 100th anniversary. Sure, I thought, I’m positive that the Naval Historical Collection includes enough material to create a great exhibit for the Naval War College Museum and an online exhibition for NHC. That was 7 months, three projects, and about 1000 documents ago.

The Battle of Jutland informed education at the Naval War College for over 30 years. From 1916 until the U.S. involvement in WWII in 1941, students who attended the Naval War College heard lectures, wrote papers, and gamed the battle looking at it from the vantage point of strategy, tactics, scouting, fleet maneuvers and distribution, leadership, and technology. Studying the Battle of Jutland materially affected how two generations of U.S. naval and military officers, including future four and five star admirals Chester W. Nimitz, Ernest J. King, William Halsey, and Harold Stark understood naval warfare, strategy, and tactics.

The collections highlighted in this “Inside the Archives” contribute to our understanding of the Battle of Jutland’s impact on interwar and WWII naval leadership, the history of the Naval War College, and U.S. naval history. 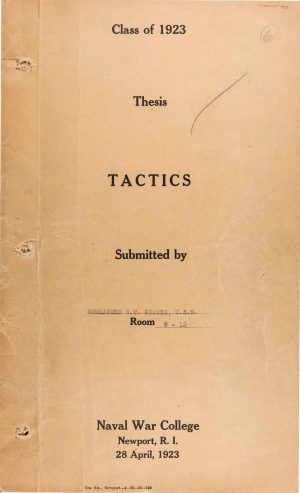 A discussion of naval tactics used in war with England and the USA and with Japan and the USA. Includes tactiics used in the Battle of Jutland, 1916, and lessons learned.

“The Battle of Jutland, on account of the magnitude of the forces and the stakes involved, and because of the conditions under which it was fought, has no equal in history.”

The Naval Historical Collection holds over 1500 student theses from 1912, the year the College leadership introduced the thesis as a requirement, through the 1970s. Of these, over 200, written between 1919 and 1939 address the Battle of Jutland. Assigned to write about “Policy,” “Tactics,” and “Command,” and given British intelligence reports and translations of German documents, future Navy leaders Nimitz, Joel R.P. Pringle, and Richard L. Conolly, and their fellow students discussed the importance of offensive action, technology, intelligence, and scouting. The focus of the papers shifts during the twenty year period—at first the students focused on the success of British Admiral of the Fleet John Jellicoe versus Imperial German Navy Admiral Reinhard Scheer; later, once the students had access to primary sources including messages sent at Jutland and translations of German orders, students began questioning British decision making and preparation and show admiration for the German High Fleet.  Some students, like then Captain Ernest J. King, took the basic assignment and drew nearly predictive conclusions: King, writing fifteen years after the battle, highlighted to role of a new technology, radio, as a means of “increasing the flexibility of strategy, both as to transmission of important information about the enemy and adaptation of orders,” something King would need to do with the new technologies of WWII from radar to computers. Reading these papers provides a snapshot for how the Navy educated it’s best and brightest in the interwar period. 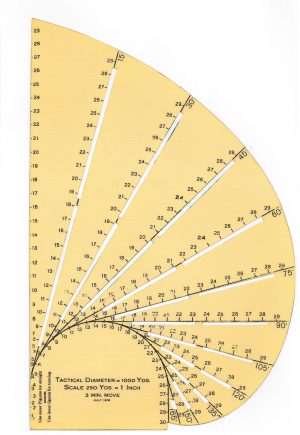 “Only by practice in war games in miniature and at sea will he become that, hence after the studies outlined above must come practice of which the efficient tactician can never get too much.”

From the first year of classes at the Naval War College, students participated in war games. Led by William McCarty Little and adapted from the British and German naval education models, NWC worked to perfect the model. In the fall of 1916, only four months after the Battle of Jutland (May 31-June 1, 1916), students at the Naval War College played a war game based on the Battle. Created by H.H. Frost and Dudley W. Knox, the first game used naval attaché reports and newspaper articles to provide ship movement and targeting information. When the Naval War College reopened in 1919 the new president, Admiral William S. Sims, instituted a new curriculum that emphasized a practical education for naval officers—and relied heavily on the lessons that could be learned from war gaming. Not only did students tackle “theoretical” games like Blue (U.S.) versus Red (U.K.) or Orange (Japan), they conducted numerous historic-based games from WWI: Jutland, Falklands and Dogger Bank. In the 1920s, the creation of a Historical Research Department, which fell under the Intelligence Department, added a whole repertoire of historical battles and events to the curriculum from the American Revolution to the Civil War blockades and the Battle of Mobile Bay and a war game pitting Admiral Nelson against Villeneuve in the Battle of Trafalgar on the War College’s gaming floors.  These sources, housed in the Naval Historical Collection’s College Archives are vital sources to understand the development of war gaming and its modern development.

“Nothing is easier than to criticize after the event. It is dangerous to criticize when we have such imperfect knowledge of the actual facts as we have to day.”

A critical part of the curriculum at the Naval War College depended on the reading lists provided to students. In many ways, it should  be reassuring to modern students that a heavy reading load has always been a marker of the Naval War College education. A key component of the education was the Naval War College’s publications department. They produced nearly all of the materials used in the classroom setting including the source material used by faculty and staff to study WWI and the Battle of Jutland. The value of these sources lies not only in their relationship to the curriculum at the Naval War College, but also in the immediacy and the variety of the material produced. From 1916 through the 1930s, NWC faculty and staff and Office of Naval Intelligence personnel housed at Naval War College collected and translated German documents ranging from Naval attaché reports and messages sent during the Battle of Jutland to first-person German accounts and the writings of German military strategists including General Field Marshal Helmuth von Moltke to help the students better understand the art and science of war. The collecting was not limited to German sources: French, British, and American materials can be found across the College’s readings including the one highlighted here from the 1930 Department of Intelligence Curriculum document.

All of the materials discussed in this column are available to members of the public. Visit the Naval Historical Collection’s website at usnwcarchive.org and visit our Battle of Jutland online exhibition, or contact the archivist at NHC@usnwc.edu.

This entry was posted in Inside the Archives and tagged dara baker, inside the archives, Naval War College, rhode island, us naval war college. Bookmark the permalink.