Inside the Archives: The Merchant Marines in Maritime History

The role of merchant marines can easily be eclipsed in naval history studies. Fortunately for cadets and students at SUNY Maritime College, this history is celebrated and integral in the College’s atmosphere and in our history and our mission. Merchant marines primarily transport cargo and passengers during peacetime. In times of war, merchant marines serve as auxiliary to the U.S. Navy. During World War II, merchant mariners had the highest causality rate of any military branch, yet they the U.S. government only granted them veteran status equal to the U.S Navy, Marines or Coast Guard until 1988 after a prolonged political and legal battle. The Stephen B. Luce Library and Archives plays a key role in the College’s culture and houses the College Archives, Alumni and Faculty papers, and archival Special Collections focused on maritime history and the history of merchant marine training and education in the U.S. 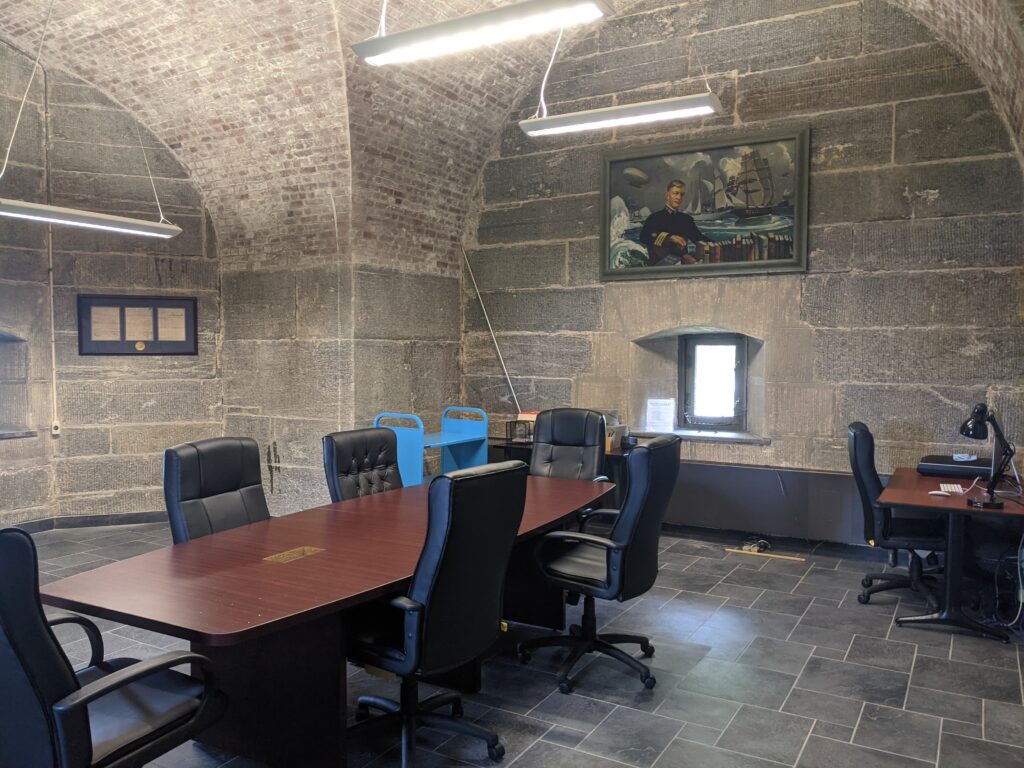 Admiral Stephen B. Luce is credited as the father of modern merchant marine training in the United States. His dedication to naval training began long before his tenure at the U.S. Naval War College in Rhode Island (1884-1886) when Luce led efforts for Congress to pass the Act of 1874 allowing states to acquire and outfit retired naval vessels for nautical training and education. Luce received his own introduction to the sea through a training ship apprentice program at the Boston Navy Yard a generation earlier. Pushed by Admiral Luce, New York became the first state to take advantage of this law, purchasing a retired sloop-of-war USS St. Mary’s they the state loaded with 26 students as the first class of New York Nautical School in 1875 (now SUNY Maritime College). This new two-year training program took place entirely aboard the St. Mary’s where students lived and learned, aboard fulltime. 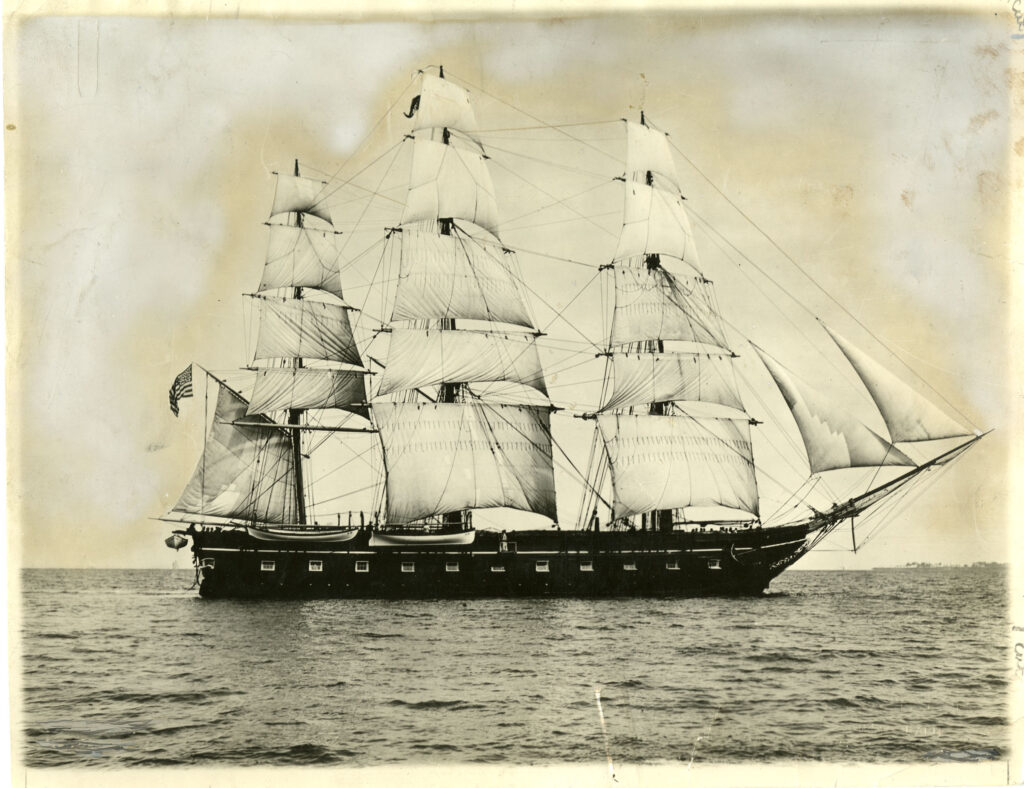 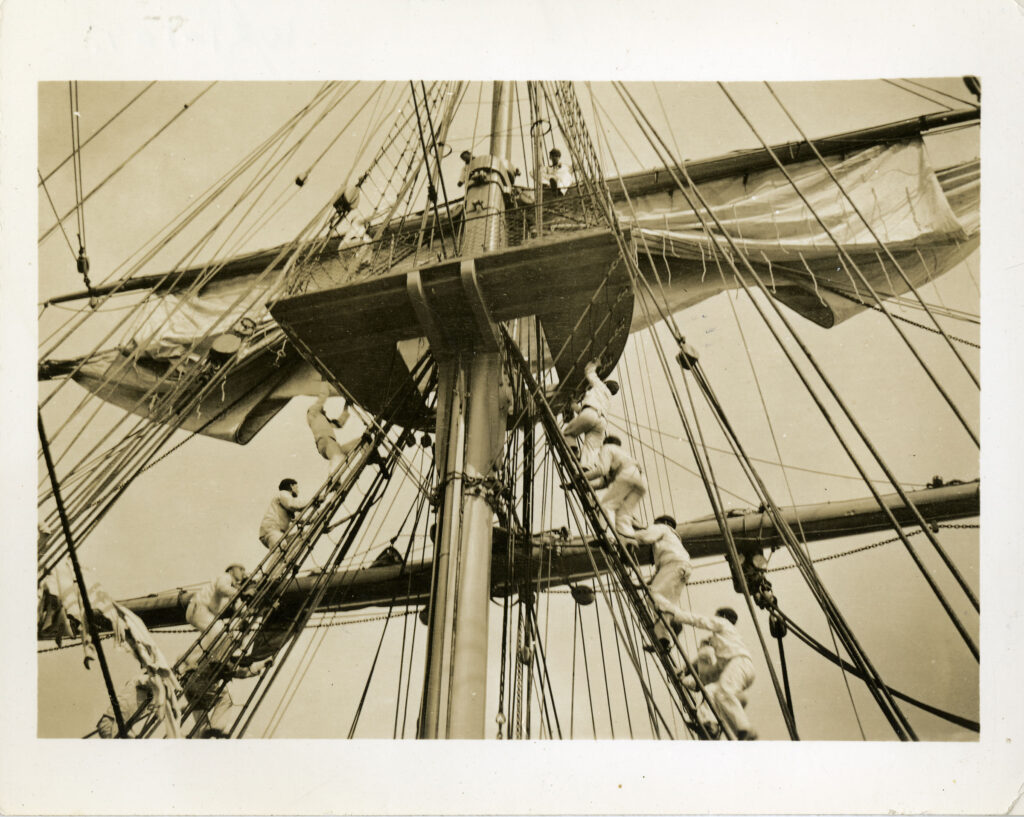 Maritime College administration continued Admiral Luce’s tradition, purchasing retired ships from the federal government and transforming them into training ships for cadets, for decades. By 1938, the College acquired land and Fort Schuyler in Throggs Neck, NY in New York’s East River as a permanent home and joined the SUNY system. Maritime cadets continue to live aboard training ships in the summer and spend the rest of the academic year at the Fort.

The College Archives’ collections captures the student experience beyond seaboard training. The Archives includes materials that show student and faculty life through documents, photographs, yearbooks, and administration records. One collection available in our Digital Collections, is the Porthole Student Newspapers. This student run newspaper was a primary forum for campus dissent. Beginning in the 1950s, the published complaints were almost always minor in nature with complaints of room décor, television privileges, and bad food. By 1963, with administration permission, the student newspaper circulated a questionnaire asking for opinions about the school and its curriculum. This opened the flood gates of student and faculty opinion and several sharp editorials were published that described the disconnect between the faculty and students. The Archives digitized a selection of  Porthole issues 1954 to 1959, with generous support from an alumnus who served as student editor during that time. Two of my favorite sections found in the student newspaper are the “Scuttlebutt” and “Drag of the Week” that show how “serious” students thought about their futures. To access or read earlier and later issues, see the SUNY Maritime Library and Archives contact information below. 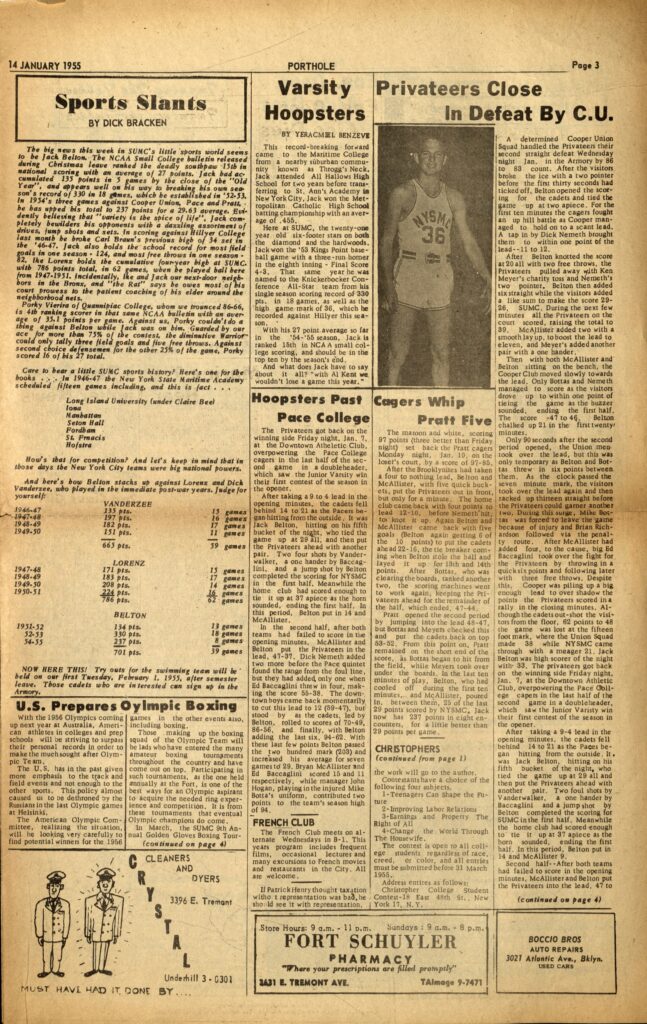 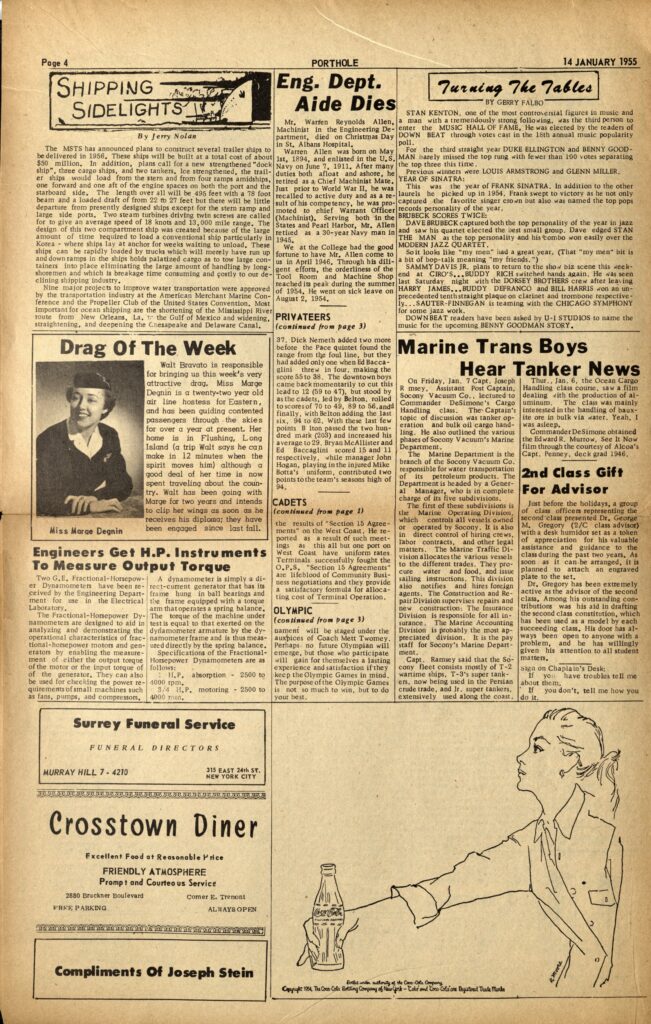 Alumni of SUNY Maritime brim with pride of their alma mater and support the archives by donating their records and sharing their memories. In 2012, the Library held an event during Homecoming, the Maritime Memory Oral History Project by library staff and volunteers. You can find and listen to the oral histories through our Digital Collection or SUNY Maritime’s collections on the Internet Archive. One active alumnus, Phillip Dilloway, donated a diary he kept as a cadet on Empire State I (also known as American Pilot) and his book titled “Class of October 1946” that preserved the voices of his fellow Silent Generation merchant marines. 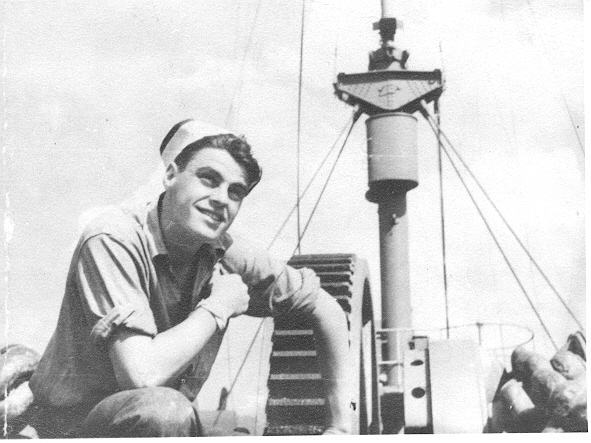 Self-portrait of Dilloway aboard USS American Pilot (also known as Empire State I) in the summer of 1945, from Maritime College Digital Collections.

The Sailor’s Snug Harbor collection was deposited at SUNY Maritime in 1976 as the Harbor was preparing to relocate to North Carolina. Originally established in 1801 from the will of Robert Richard Randall, Snug Harbor was built on 140 acres on Staten Island overlooking the Kill Van Kull in 1833 by the Board of Trustees after 30 years of legal battles. The Sailor’s Snug Harbor is one of the country’s oldest and first secular philanthropic institutions opening its doors to “aged, decrepit, and worn out” mariners. There are other Snug Harbors in the U.S. including Boston, MA.  The Luce Library and Archives collection is the largest and most extensive Snug Harbor collection available to the public in the U.S. and is rich with detail and points of interest about maritime history and a sailor’s lifetime. 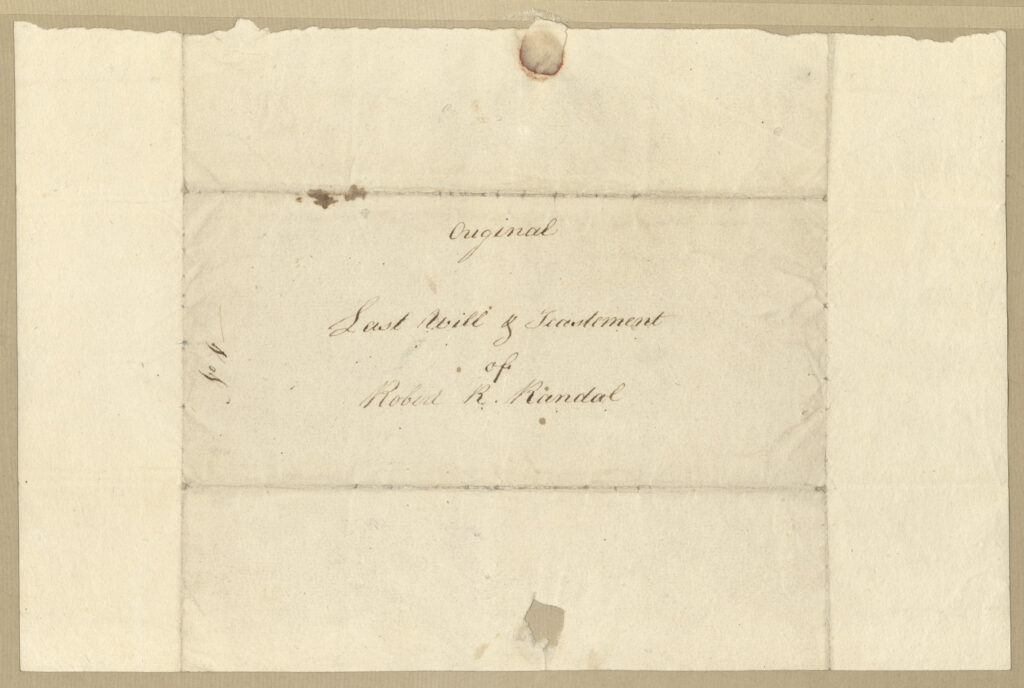 Title page of the last will and testament of Robert R. Randall, Maritime College Digital Collection.

The Snug Harbor Trustees hired renowned architect Minard Lafever in the late 1830s to design the main houses on the property. Over time, Snug Harbor developed its own mini-township which included a working farm with livestock, a church, a hospital, a power plant, and a graveyard. Residents of Snug Harbor were called “inmates” and strict admission requirements. Run by a Board of Trustees, the head administrator, “Governor”, oversaw daily operations. The most famous Governor, Thomas Melville, youngest brother of Herman Melville, modernized recordkeeping and expanded the population doubling the size of the community during his tenure. The Melville family spent many holidays at Snug Harbor during Thomas Melville’s tenure from 1867-1884 and the archives holds some Melville family memorabilia. You can read more about Herman Melville signed book in our collection. 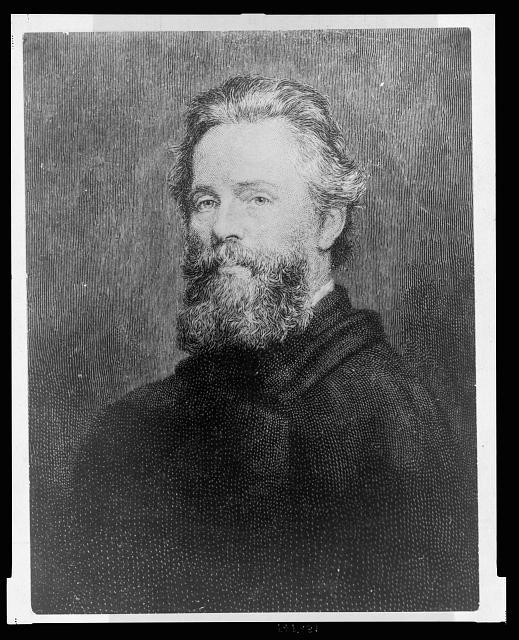 Snug Harbor remained in Staten Island until the population began to decline when Snug Harbor relocated to Sea Level, North Carolina in 1976.

In 2015 and 2016, archivists and librarians digitized letters by residents, administrative records, meeting minutes, account books, “inmate” records and “inmate” photographs from the Snug Harbor collection. These records are widely used by current Maritime College students and faculty as part of the Maritime and Naval Studies graduate program. The inmate records and photographs have proven to be of great interest widely used by genealogists. Knowing the Melville’s family importance to American Literature and how many Americans gained the knowledge they have of 19th century maritime life through Herman’s writings, we digitized most of Governor Melville’s correspondence. Researchers will find information about life and management of Snug Harbor and Governor Melville’s relationship to his family.

Beyond the collections mentioned, the Stephen B. Luce Library and Archives holds a treasure trove of maritime history including pilot association records, charts, blueprints, yearbooks, college catalogs, scrapbooks, and sextons. The Stephen B. Luce Library and Archives are open to the public and appointments to visit the archives can be made via email (library@sunymaritime.edu) or call (718) 409-7231. I’d be delighted to speak to any IJNH readers interested in our holdings. To view other collections, please visit our Finding Aids page.

Special thanks to Professor John Rocco for his research into Snug Harbor’s history: “Wearily, we seek a haven” A Brief History of Sailor’s Snug Harbor.

This entry was posted in Inside the Archives and tagged inside the archives, renae rapp, suny maritime. Bookmark the permalink.